THE LOOK: LUPITA NYONG'O
The Kenyan Star of 12 Years a Slave Shines Bright on the Red Carpet

This month Kenyan actress and filmmaker Lupita Nyong'o makes her big screen debut alongside Brad Pitt, Michael Fassbender and Chiwetel Ejioforin the hotly anticipated new Steve McQueen movie, 12 Years a Slave. Cast into the role straight after graduating from Yale School of Drama, Nyong'o is already tipped for an Oscar nomination for her powerful portrayal of the slave girl Patsey. This East African beauty started out working behind the camera, most notably assisting Ralph Fiennes on the set of The Constant Gardener, which filmed in Kibera and Nairobi. She directed and produced In My Genes, a documentary about people with albino syndrome in Africa, and starred in the MTV-produced Kenyan TV series Shuga, in 2008. As confidently as Nyong'o slips into her new role as an actor, she is embracing her budding style icon status. During the promotional tour for 12 Years a Slave, the Kenyan actress has stepped out in elegant floor-length Prada, sported a bold shorts ensemble by Honor, and dazzled in an orange figure-hugging pencil dress by Antonio Berandi. Nyong'o is fast becoming Africa's most striking style ambassador, and we can't wait to see what she wears next—KISUA perhaps? 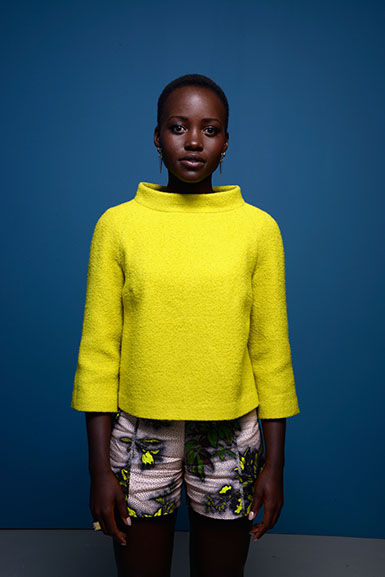