The legacy of Fela Kuti, Nigeria's most iconic musician—and the creator of Afrobeat—is celebrated with a weeklong music and cultural festival in Lagos in October. Felabration is hosted at the Africa Shrine club, which was established by Kuti in the 70s and still acts as an athenaeum to the Afrobeat genre. Kuti was known worldwide for his seductive, bass-thudding performances on global stages like Glastonbury, but closer to home he was also a radical freethinker and pan-Africanist. He championed a message of political and social emancipation in Africa, and propagandized against any system that oppressed its people. Detained many times for his outspokenness against the Nigerian government, Kuti's final detention would lead to his death in 1987. The funeral was attended by more than a million people, and in recognition of Kuti's national significance, the same government that once imposed a ban on his music is now a primary sponsor of Felabration. Founded in 1998 by his eldest child Yeni Kuti, the festival features debates, concerts, photo exhibitions, shows and symposiums. Over the years Felabration has staged like-minded artists including Hugh Masakela, Lucky Dube and Femi Kuti, and annually more than a 100 performers from around the world gather in Nigeria's capital to partake. This year Bob Marley's wife Rita will lead the symposium under the festival's 2013 theme:  'Movement of the people—the Fela-Bob Marley Perspective'.  The theme honors these two prolific musicians who dedicated their lifetimes to using music as a tool of human rights expression, and preached self-liberation from race, class and material restrictions. To reiterate this ethos of One Love, Felabration is an inclusive, for the most part free-of-charge festival, and encourages anyone to partake in the celebration of two great cultural icons.

Felabration Festival runs from the 14th-20th October 2013 at the Africa Shrine on Adeleye Street, Lagos. 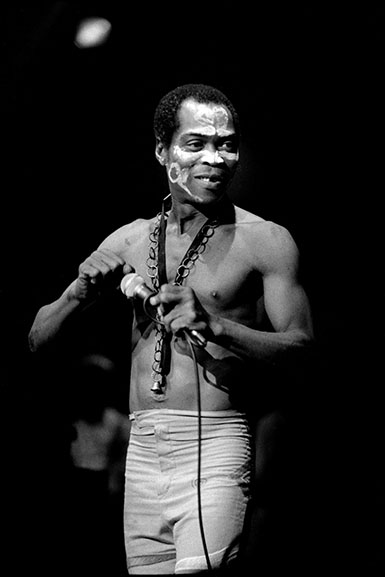